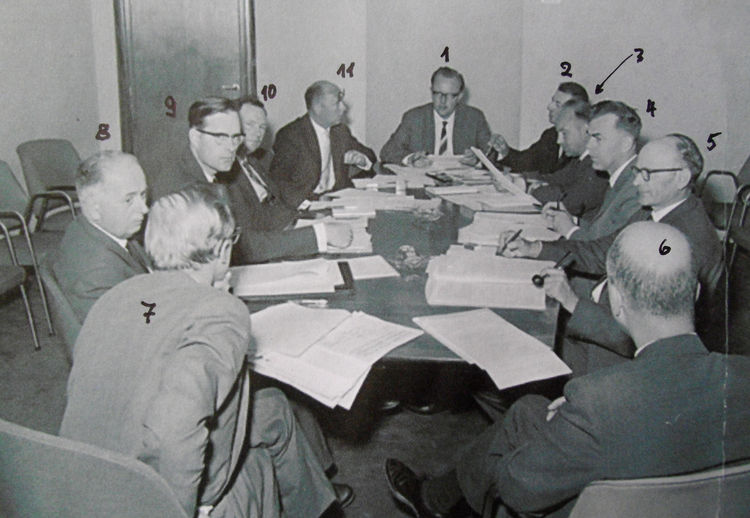 Meeting of Council members at the XV!th International Horticultural Congress in 1962 at Brussels. Participants

The history of EWRS can be reassumed in four phases starting from 1958 up to today.

Origins
In May 1958 a meeting of weed scientists in Ghent set up an international working group to accelerate progress in solving the problems caused by weeds. The first outcome was to a conference at Stuttgart-Hohenheim where Project Groups on bracken, wild oats and methods of herbicide evaluation were organised and the EWRC was established at a second meeting at Oxford in 1960. Each country was allowed to nominate an official representative on the Council and by 1975 there were 24 of them plus co-opted members from Israel and the Lebanon. In addition, there was an advisory panel of 4 scientists from agrochemical manufacturers to reflect the increasing importance of herbicides. Close interaction with industry has continued (and the Presidency of EWRS alternates between industrial and non-industrial members). The 1960 meeting also decided to start the journal Weed Research. This was made possible by the generosity of a number of organisations and companies who contributed to a Guarantee Fund to cover the financial risk.

The transition from EWRC to EWRS
As the activities of EWRC extended it became apparent that a society with membership open to all individuals and organisations who wished to participate would be more effective. A steering committee began work to develop plans for the new society in December 1973.

The new society formally came into existence and held its first General Assembly on 3 December 1975 during the Symposium in Paris organised jointly with COLUMA on the Status, Biology and Control of Grassweeds. The legal seat of the Society was in the Netherlands but the Secretariat was initially based in the UK after which it spent periods in France, Germany and now is spread over three countries. The object of the Society, as described in the first Constitution, is to promote and encourage weed research and control technology in Europe for the benefit of the community as a whole.

The Constitution remained unchanged for 10 years. The Governing Body was the Council composed of nominated national delegates, elected members, officers of the Society and co-opted members. As over 40 members were involved, this arrangement proved to be unwieldy, so when the Constitution was revised in 1984-86 the Council was disbanded and the Executive Committee (EXCOM) was given total responsibility for the Society's affairs. National representatives were retained but were elected and were given different responsibilities.

SCICOM Evolves. In 1985 not only was the Constitution amended but the operation of SCICOM was revised. Weed research was divided into logically connected parts termed Main Subject Areas (MSAs) which included the existing and new Working Groups. EXCOM appointed a chairman for each MSA who became a member of SCICOM. Symposia were to be based on one or more MSAs. More

Response to political change in the 90ies
The Budapest and Poznan Symposia showed the Society's increasing concern with eastern Europe and there have also been training programmes in Romania (1994), Belarus (1995) and Russia (1997). As a result of a policy to facilitate recruitment, over 35% of the membership now live in former COMECON countries. More

Communication, liaison and dissemination of information
Weed Research was a well-established journal of EWRC and it has continued to be vital to the Society both for scientific communication and as a source of income. Since 1994 it has been produced in English only. The Newsletter was initially almost literally a letter but it expanded following the changes in the Constitution and SCICOM in 1985-6. It then reported planned and completed activities of Working Groups and includes abstracts from workshops and other meetings. Recent issues plus other Society information and job vacancies are available on the Society's website, http://www.ewrs.org/.

4) EWRS in the new Millennium

In the first decade of the new millennium the EWRS has worked hard to modernise the Society.  The Society realised that is it of utmost importance for its future success to attract more young weed scientists and to open up to weed scientists from all over the World. These aims are now explicitly included in the Society’s objectives. Also the active involvement in international networks gained more interest from the Society and became one of the Societies objectives.

The Weed Research Journal gained importance and turned out the highest rated weed science journal in the world in 2002. There has been a lot of commitment of the EWRS members to the Journal, and the Journal provides a considerable resource of income for the Society.

In 2004 the submission went online and encouraged a serious increase in submissions. ISI-rating increased steadily, arriving at 1,875 in 2017/18. For a very long period in the new Millennium, from 2005 to 2018, E.J.P. Marshall from EWRS has been Editor-in-Chief of the Journal. Some of his reflections on those years can be found in the leading article of Weed Research, Volume 59 (https://onlinelibrary.wiley.com/doi/10.1111/wre.12350). 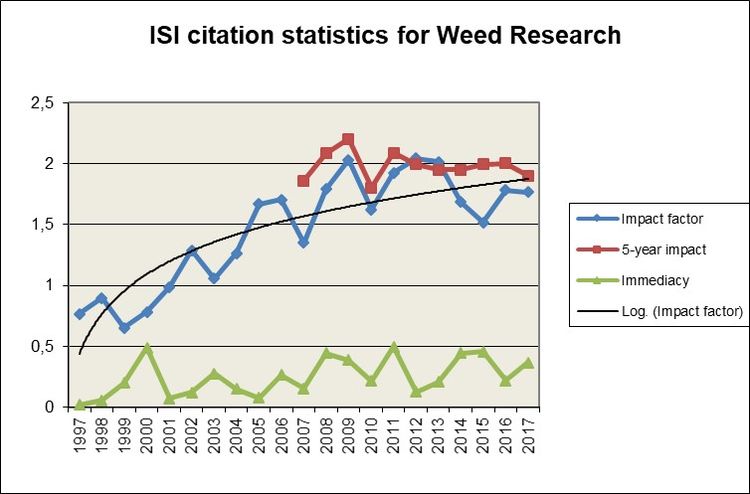 Another technical improvement inside EWRS was the online edition of the newsletter that became digital from 2007, abandoning the paper version. All digital Newsletters can be researched and downloaded from the EWRS website.

Starting from 2020, with the launch of the new EWRS website, the newsletter will take another format. The newly designated Communication Officer (2019) establishes a Communication strategy for the EWRS, to move away from the current pdf version of the newsletters towards a more dynamic and modern web-based format where members will be posted a regular bulletin, giving links to interesting and recent news and updates from the EWRS website.

In 2004 the Executive Committee and the Scientific Committee decided to have a 2-3-3-years periodicity of the EWRS Symposium to avoid contemporaneity with IWSC Congresses. The formerly held Mediterranean Symposium was eliminated as a separate event, and it was integrated into the EWRS Symposium.

In 2008 the constitution of EWRS was modified to allow some modernisations to take place. The most prominent change was the new election procedure and the introduction of online voting. The new procedure became operative in 2010 and helped to save a lot of time and bureaucracy during the election procedure.  The constitutional change also redefined the Executive Committee, now called Board. The Board now consists of five elected Board members, the Officers of the Society, the Chairman of the Editorial Board of the Society’s journal ‘Weed Research’, the membership officer and four adopted society members. In 2008 the Board and the Scientific Committee set up the new objectives of the Society.

According to the Constitution 2017 (Bye-Law accepted by the 44th General Assembly at Ljubljana, 2017-12-08), four Additional Members are elected out of the six candidates proposed by the Board. Criteria for the choice of the candidates are characterized by balance of gender (no less than 33% of each sex) and of experience (no less than 50% of Early Career Scientists). Furthermore, each candidate has to come from a different institution (institutions are Universities, Research Organisations, Companies etc.) and must represent the geographical choice of EWRS in Europe.

The Scientific Committee is led by the President, the Vice-President and the Scientific Secretary who is in charge for four years and can be re-elected for one more period. The Scientific Secretaries of the new millennium were first of all Prof. Paolo Barberi (Italy) from 2001 to 2009, and then Prof. Josef Soukup (Czech Republic) from 2009 to 2017 and at the moment Prof. Husrev Mennan (Turkey) is serving.

In 2005 EWRS was officially accredited as publisher, and has therefore been able to assign an ISBN to all its publications (congress proceedings, etc) ever since.

The WGs form the central engine of EWRS, the Scientific Committee. The number of WGs rises up to now 13 WGs; some have been transformed or integrated in ampler themes (e.g. the Aquatic weeds WG has been absorbed in Invasive Weeds) and new ones have been created (European Weed Mapping in 2009 and Herbicide Tolerant Varieties in 2013).

In the first decade of the millennium, the central role of the WG activities was confirmed and the part of the Society’s budget dedicated to finance the WG activities was increased. Integration between the single Working Groups is strongly supported, such as common activities, joint WG meetings, the exchange of knowledge and experience. These activities are supported by extra funding.

In the new millennium the EWRS decided to set up a strong programme to support young scientists: grants for attendance of Symposia and Workshops of the Working Groups were announced where travel grants are provided to young scientists and reduced annual EWRS fees are available.

For example, in 2010 15.000 Euro were spent in subsides for young scientists to allow participation at the 15th Symposium in Kaposvar, Hungary. Forty-six students received a subsidy and all of them subscribed to EWRS.

In the most recent EWRS Symposium 2018 in Ljubljana, Slovenia, a similar budget was allocated for Student grants, with a maximum of 500 € for more than 30 early career scientists. Moreover, as a new element of Symposium Programme, a special Student Oral Session was included in the Programme in Ljubljana.

The decision of the Board not to increase membership fees during the last years has the aim to enhance the attraction of EWRS for new members, especially among young researchers.

“To support the development of weed science and exchange of knowledge between weed scientists: with a primary aim of improving weed management systems, emphasising the sustainable use of natural resources and protection of the environment.”

Very important from the beginning of the 2000’ became the systemic approach, “we are slowly moving towards system-thinking. Signals of this trend are an increasing integration between weed science disciplines (e.g chemical, mechanical, cultural, biological weed control) and the fact that basic and applied disciplines are getting together (for example weed biology and crop/weed interaction studies). Also, other disciplines are becoming more closely connected to weed science (e.g. entomology and plant pathology). Studies on non-target effects of herbicides and side-effects in the treated crop (e.g. an increased susceptibility to insect pests with high herbicide rates) are also gaining pace, as well as studies integrating the environmental fate of herbicides with ecotoxicology issues.“ (Barberi & Kropff 2002, Report on 12th EWRS Symposium).

Integrated Weed Management (IWM) has gained much importance both on European institutional level, and inside the EWRS. The discussion on contents is always very vivid.

For example, in the Bari 2005 Symposium the discussion opened to moving towards system thinking, getting closer to farmer’s and consumer’s needs. During the previous Symposium in Papendal the question was: “Are we moving from integrated crop management to integrated agro-ecosystem management?", instead after the following Symposium in Bari the question occurred: "Are we perhaps mutating from weed scientists to vegetation managers?"

EWRS forms a successful network of researchers across Europe, for example in Horizon H2020 projects like IWMPraise (Integrated Weed Management: PRActical Implementation and Solutions for Europe) that is based on multiple EWRS members that collaborate in the project. The coordinator of this project is Prof. Per Kudsk from Denmark, WG-leader of WG “Optimising herbicide use in an IWM context”.

EWRS participated on invitation of the European Union in a Network of Excellence (NoE) on “Reduction of Chemicals in Crop Production” within the 6th EU RTD Framework Programme, starting in 2004/5. The Network of Excellence ENDURE to favour networking between researchers, was financed with 17 Mio Euro for 40 partners, with the issue of crop protection. The objective was to gather the best European experts into this network that served to write European Research Projects. The project finished in 2010 but the network is still alive.

Another connection established by several EWRS members is that with the ANdiNA Network which meets every 2-3 years for a week in a remote location to discuss in an intense and informal way on weeds and the direction that Weed Science is meant to take, producing collaborative papers. EWRS contributes with personal and financial support to this network.